Let me just say that San Miguel is absolutely incredible. The city is so beautiful and the people here are all so kind. I will start by admitting I was scared to come here. For years, all I had heard was Mexico isn’t safe, don’t visit Mexico. While at the same time I was being told by my grandparents, “Mexico is amazing come with us”. In the end, it was a hard choice to go.  But, I’m so glad I did. After seeing the city, any fear I had about coming to Mexico went away. Anyway here is what I did during my two weeks in Mexico.

We flew into the Queretaro Airport on Tuesday the 7th. We flew out of DFW and 2 hours later we were in Mexico. Here are just a few pics from the flight as well as our takeoff and landing.

After we landed we had to go through customs and immigration. Unlike some other countries we’ve been to, this immigration was really small. There was one person checking passports and then baggage claim consisted of one carousel. After that, we had to drive for an hour and a half to the house. Heres a random pic of me and my uncles in the van we rented.

Finally, here is a pic from the roof of our casita at our house.

On our first full day, we decided to go to some art exhibit. It was a building that consisted of about 60 different shops with all different types of art; some consisted of like interior things like pillows and decor, others had outdoor furniture or jewelry. Here are some pics from that. 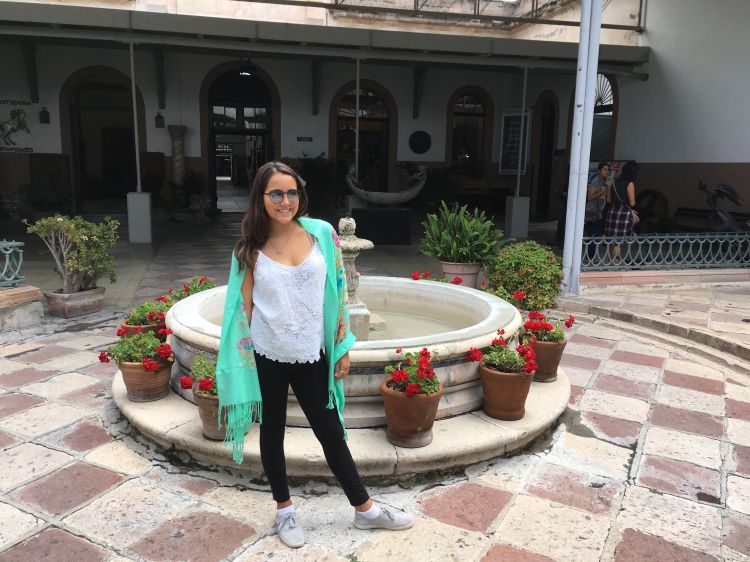 After lunch, we wandered around the square. Throughout San Miguel, there are quite a few churches. Probably the most infamous is the one in the main square. Here are 3 pics featuring the church.

Silly
I also got a crown, that I wore every day since I got it.

For dinner, my talented Uncle made us some amazing pork and we sat in our outside dining room. Featuring my grandpa mid somthing 🙂

On our third day, we took a cooking class. I don’t have many pictures from that class, for the main reason that I was partly asleep for most of it. That sounds awful I know, but I had stayed up till 2 am the previous night to talk to my dad. Because of the time difference, we have to wait till 1am, which is 5pm his time and that’s when my dad gets back from work. The class was at 9am and we had to wake up and walk there.

Had the class been more hands-on, then it was I think I would have stayed awake. But, it as more of the history of Mexican food and where it comes from. For the sake of time, I will talk about my 2 favorite dishes. My first favorite was the homemade quesadillas. We made our own tortillas out of Masa and then filled them with cheese and mushrooms. My other favorite dish was the dessert. It was pineapple rings with chocolate powder and some crispy seeds.

After the cooking class, I napped and then I and my grandparents went back out. I then proceed to act like crazy American and run out into the street for pics.

While in the square, we got to watch part of a wedding. But not even 10 minutes later, it was pouring rain and we retreated for dinner.

Today we walked around. I know right “real descriptive Ella”, but what else do I say. We walked from our house down to the main square, then wandered around. We stopped inside some shops and courtyards to take pictures. 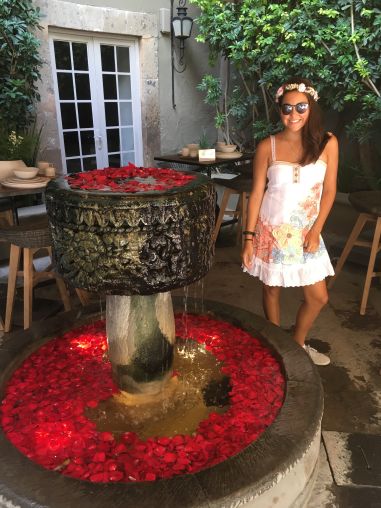 We were only out for 2 hours, before going home and spending the rest of the day in the pool. 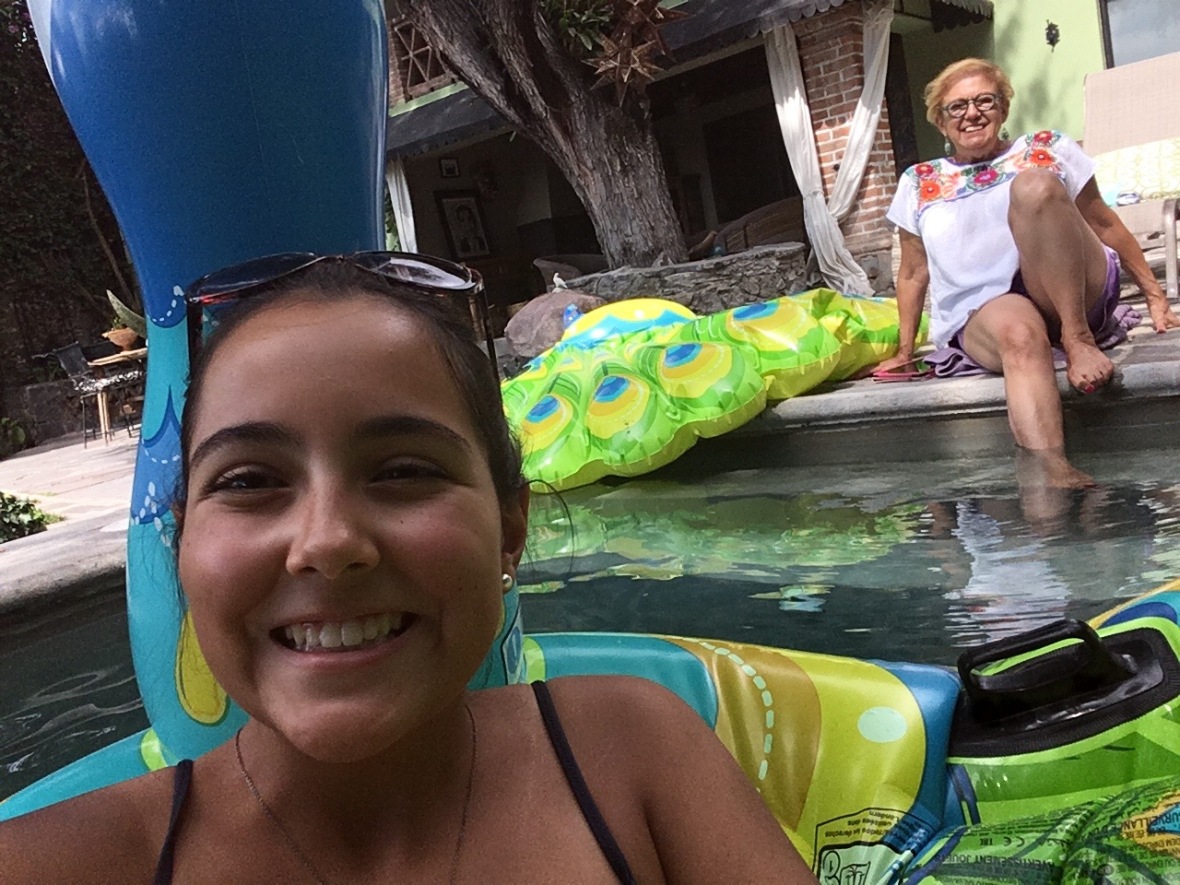 Like yesterday today, we had a photo shoot. Today was our first Saturday in San Miguel, we had heard there was an art market so we walked down there. To get to the park, where the market was being held, we had to walk a whole different way then we had been the last few days. We took full advantage of this and got some more pictures, enjoy. As for the actual market, we loved all the art pieces but didn’t buy any. 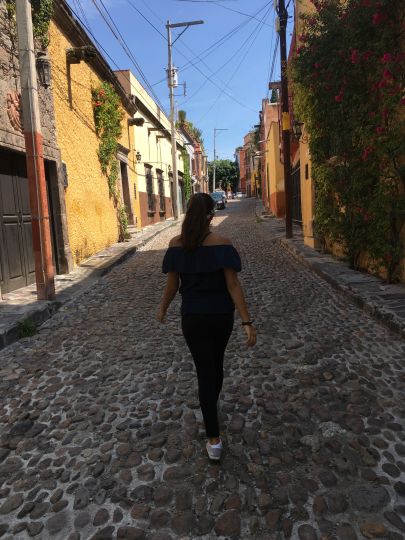 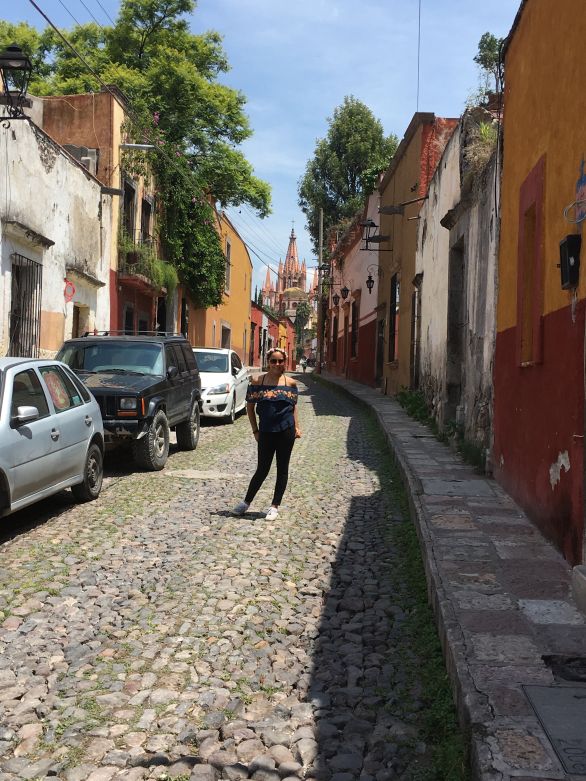 As we got closer back to town, we made reservations at the Matilda to celebrate my brother’s birthday. We then met up with our uncles for lunch.

That night we all went out to eat at the Matilda since my uncles were leaving the morning of my brother’s birthday. BTW I’m the one taking the picture.

Today was Stephens Birthday. Per his request, we stayed home all day and swam in the pool. 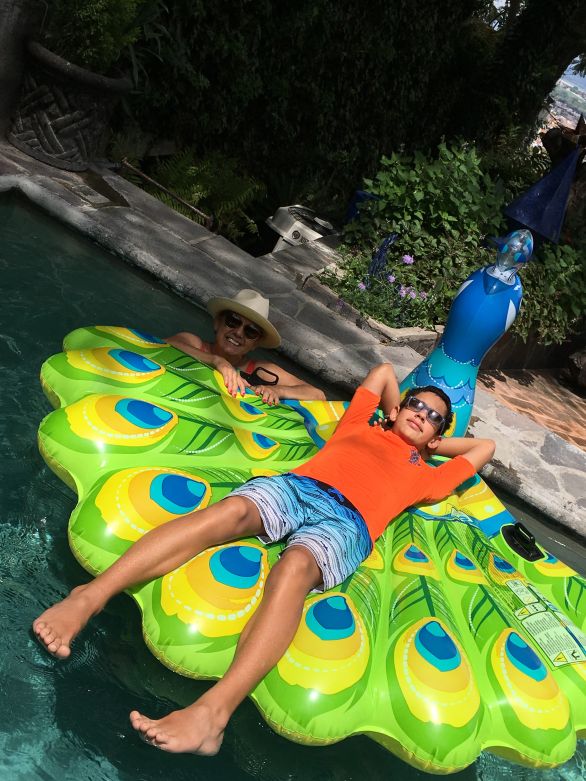 For lunch, we went to a rooftop restaurant that was about halfway to the square. 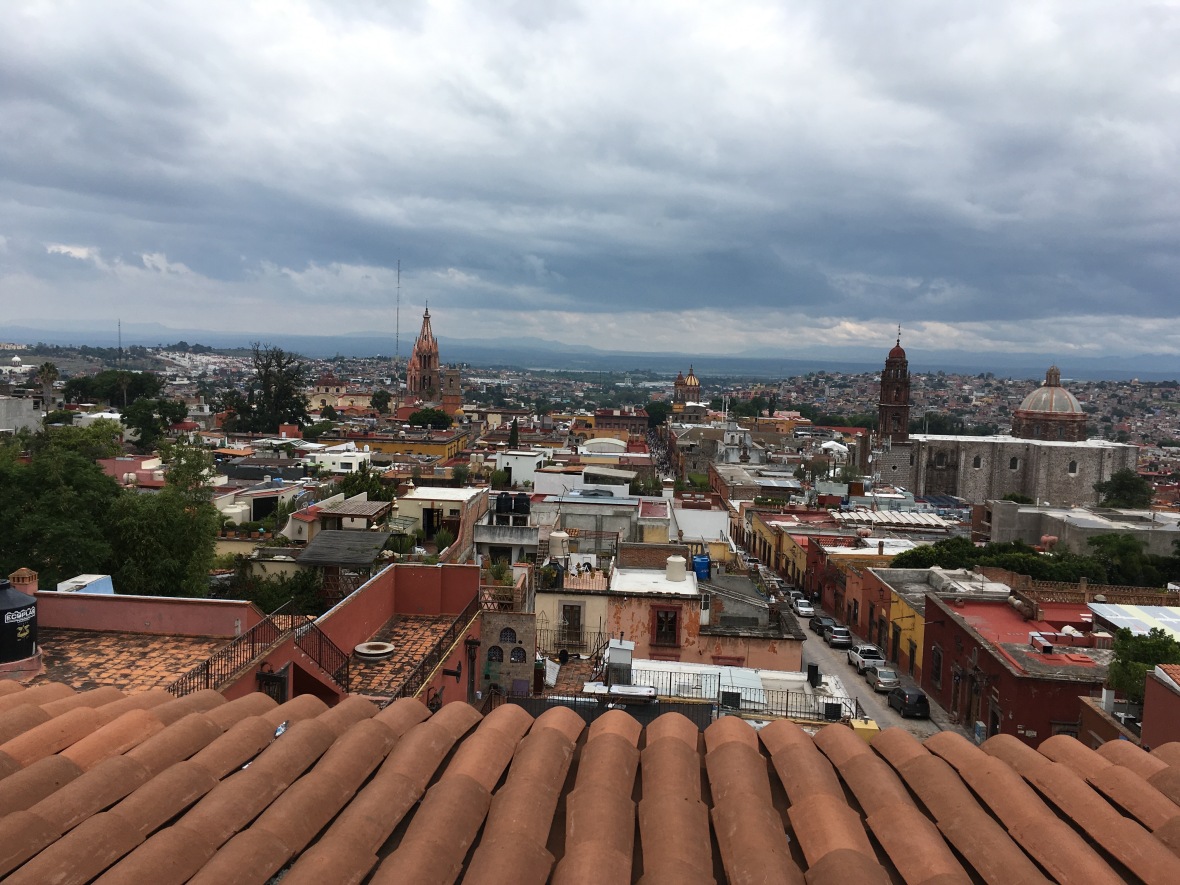 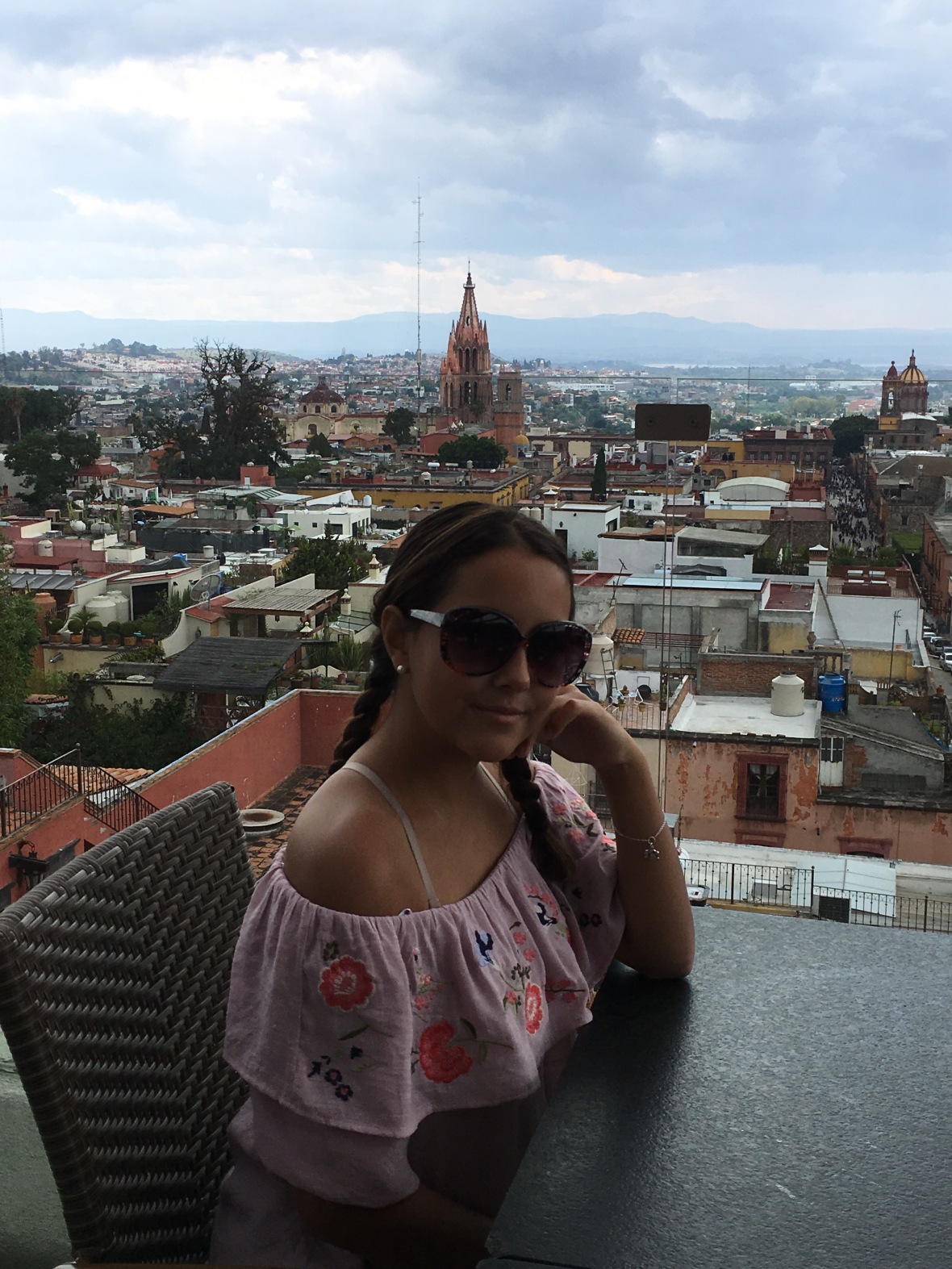 At this restaurant, I had the most amazing food I had all trip. For my lunch, I had Octopus that had been cooked in a Spanish sauce featuring tomatoes, garlic, and tomatoes. OMG, it was amazing.

To celebrate Stephens birthday they brought him out a carrot cake. And I swear this was the best carrot cake I had ever had. In retrospect though, I usually don’t like carrot cake at all. I mean why ruin cake with vegetables, it makes no sense 🙂

I have decided to cut this post in two. I think that the post by itself will be way to long so I’m going to give it a part 2. I’m ending it here because we did less the second week then the first. So this post is from August 7th- August 12th. The second part will be up later this week. Thank you so much for being patient I love you all. Also, if you want to follow me in real time, and see what my everyday life is like follow my Instagram at Traveling_Ell

Until next time, safe travels